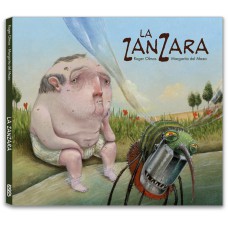 A mosquito agrees to help an old man to escape the horrible giant snake determined to eat him by discovering which is the tastiest flesh in the world. In order to simplify the mosquito’s task, the old man equips the insect with metal teeth (as big and hard as an armour!) so that no creature would be able to resist its bite… unaware that the clever little animal will use it to satisfy its endless voracity, forgetting meanwhile the purpose of its quest!

Thanks to this funny story we’ll learn that the mosquito buzz is actually its war shout, and we’ll discover the reason why snakes are so much into mice and the swallows nest near our houses.

Along the way, we will enjoy the adventures of a gang of characters that will teach us how justice and solidarity always win over arrogance and brute force… and that small white lies can be useful sometimes! This popular tale belonging to the Chinese oral tradition gains new life in the written form thanks to the words of Margarita del Mazo. Taking advantage of her solid experience as an oral narrator, the Spanish author adapt the story to the page through a fluid and simple style, marked by a sense of humour in line with the amusing and detailed oil illustrations by Roger Olmos. The unrealistic proportions enhance the human (the old man, the smith, and the kids) and animal (the snake, the mosquito, the swallow, and the mouse) characters with a peculiar interpreting dimension: two different groups that highlight the contrast between reality and imagination.

The author:
Margarita del Mazo was born in Malpica de Tajo (Toledo) and lives in Paracuellos de Jarama (Madrid). After graduating in Law, in 1999 she discovered that her destiny was to tell stories and since then she narrates oral and written tales. In 2009 she published her first book, La Zanzara, and in 2010 she figured among the finalists of the Junceda Award. In 2011 she won the Lazarillo de Álbum Ilustrado Prize together with Ángela Cabrera. Her books have been translated in English, French, Portuguese, Polish, Italian, Korean, and Chinese. With #logosedizioni she published: Non mangiarmi! and La Zanzara.