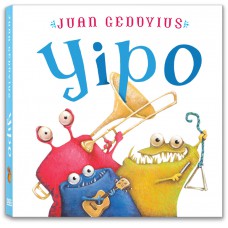 Where does this book begin? And where does it end? It’s impossible to tell, because page after page we follow a blue thread twisting and turning and never coming to an end. Even when you think you have reached the final page, the string runs around the corner and keeps winding on the other side, creating an endless path along which the oddest and funniest little monsters go wild. They may not be good-looking, but with their staring eyes and prominent teeth, they are certainly going to amuse and entertain young readers with their exuberance and playfulness. Some jump the rope, some walk a tightrope, some others are busy knitting; you are the one to choose where to start or which direction to take, following the spirals from scene to scene to discover the colourful characters who stand out on the white background.
A hilarious multidimensional and yet linear book that speaks to first time readers by using their language, which is not made up of words but of many stories and situations.

Juan Gedovius is a narrator and illustrator. He was born in Mexico City in 1974. Self-educated, he mainly dedicates himself to illustrating children’s books, an activity that has earned him awards and special mentions. His works appeared on textbooks, magazines, posters, album covers, brochures and handbooks, but also as museum displays, sceneries, wall paintings and large-scale reproductions, and have been displayed at many exhibitions both in Mexico and abroad.