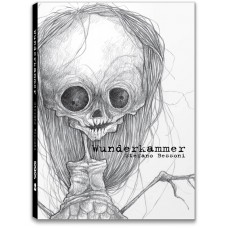 A special collection of Naturalia, Artificialia and Mirabilia
An illustrated book full of wonders treasured in the Cabinet of Stefano Bessoni.

“The wunderkammer... a little world crammed with marvels, natural or artificial, objects that excite wonder and, at times, horror.”

The word Wunderkammer literally means “wonder-room”, a container, space or cabinet where dozens, hundreds, thousands of objects are conserved. Real or imaginary objects with an irresistible attraction, the embodiments of fantasies, dreams and obsessions.

The Wunderkammer in fact is a microcosm to itself, a kind of museum-non-museum, a game of mirrors and echoes where we delight in losing our way. The wonder-room grows and takes shape along with its maker, and the maker becomes its soul, its engine, its body, its limbs, the instrument for collecting its marvels. But there is a risk that the Wunderkammer may get the upper hand and end up devouring its own creator, transforming them into the final item of the collection, the last piece of the mosaic, the crowning wonder that completes something by definition uncompletable.

This paper Wunderkammer, created by Stefano Bessoni, contains three characters and three cabinet of curiosities, a series of original drawings, mid-way between the grotesque, the fantastic and the hilarious.

Naturalia: Jonah Zalkowsky is a collector of ‘natural’ objects. His wunderkammer contains little ‘treasures’ that death congealed and transformed into grisly marvels.
Artificialia: The wunderkammer of Ezechiel Tadeusz Baum is packed with monsters - some real, many artificial. Baum is an expert in taxidermic sculpture. when he can’t find real specimens, he creates them with his own hands and imagination.
Mirabilia: Rebecca Kowalski collects, restores and conserves old toys, marionettes, dolls, mechanical puppets, automatons…