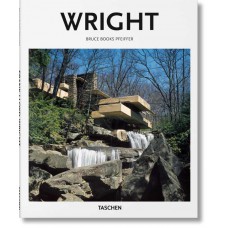 That’s Wright!
One of the greatest pioneers in the history of architecture

Widely thought to be the greatest American architect, Frank Lloyd Wright (1867–1959) was a true pioneer, both artistically and technically. At a time when reinforced concrete and steel were considered industrial building materials, Wright boldly made use of them to build private homes.

His prairie house concept—that of a low, sprawling home based upon a simple L or T figure—was the driving force behind some of his most famous houses and became a model for rural architecture across America. Wright’s designs for office and public buildings were equally groundbreaking and unique. From Fallingwater to New York’s Guggenheim Museum, his works are among the most famous in the history of architecture.