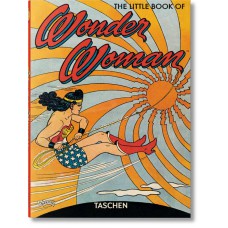 The Amazing Amazon
The spirit of truth in the DC Universe

Debuting in All Star Comics No. 8 in December 1941, the warrior Amazon Princess is a feminist icon whose strength is equaled by her empathy and compassion. Appearing in comic books, newspaper strips, and TV shows for almost 75 years, Wonder Woman stands as a towering figure in pop culture, and a role model in her fight for justice, love, peace, and gender equality. Her creator, William Moulton Marston, said she was as beautiful as Aphrodite, as wise as Athena, as fast as Mercury, and as strong as Hercules—but she’s all that and more! With 192 pages of the greatest Wonder Woman images and text by Paul Levitz, author of the Eisner Award–winning 75 Years of DC Comics, The Little Book of Wonder Woman is your definitive guide to the most popular female comic-book Super Hero of all time.

DC Comics characters and all elements are trademarks of and © DC Comics. (s15)