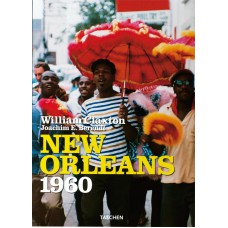 A loveletter to the birthplace of Jazz: New Orleans highlights from William Claxton's Jazzlife

New Orleans will never again appear as it does in these rare and stunning photographs by William Claxton taken for the book Jazzlife in 1960. While traveling around the United States with musicologist Joachim E. Berendt to record America`s original art form, Claxton met and photographed the jazz personalities in every major and minor city, capturing these musicians in their natural environment. Among the most poignant and soulful photographs are these from the colorful melting pot of New Orleans, the city where jazz was born.

The photographer:
William Claxton (1927-2008) began his career shooting jazz record cover art and made his name with images of such leading musicians Chet Baker, Charlie Parker, Duke Ellington, Dizzy Gillespie, and Billie Holiday. His work was featured in Life, Paris Match, and Vogue and in galleries around the world.
The author:
Joachim E. Berendt (1922–2000) was a journalist, author, founding member of South West German Radio (Südwestfunk), and a producer of more than 250 music records. His 1953 book Das Jazzbuch became the most successful history book on jazz worldwide. His vast collection of records, books, and jazz documents form the basis of the Jazzinstitut Darmstadt.