login | create an account
Categorie
Home » WHO IS NEMO’S 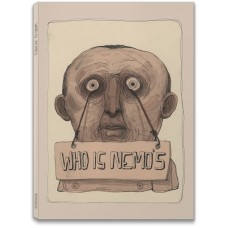 A collection of drawings, but above all of the thoughts of this young Italian street artist that looks at the daily life around him from a critical and informed perspective, translating it into images through his peculiar macabre and cynical humour.
His expressive urge is mainly inspired by the wonder aroused by the human potential and at the same time by the repulsion for the so-called “civilized” society that we have managed to create; a society which oppresses, humiliates us and turns us into mere cannon fodder, imprisoning us inside our bulky materiality and into a spasmodic search for perfection and immortality. It is no accident that the protagonists of his works are mainly naked bodies, misshapen and with flaccid skin, often tied, torn apart and caged, and always defenceless and disoriented victims of their degrading human condition. The contradictions, iniquities and deceptions of the world where we are obliged to live therefore take the shape of nightmares that insinuate in the mind and the soul of the spectators in the hope to awaken their desire for redemption.
The choice of street art as an expressive medium precisely derives from the will to extend the communicative potential of pictures as much as possible, immersing them in the city structure in order to democratically involve the people that avail themselves of it and share sensations and thoughts with them.

NemO's started drawing when he was so young he did not even know how to write yet. When he finished middle school he went to an art high school in his city, “Liceo Artistico”, and then he began to enter the “writing” and street art work. When he began drawing on walls in the streets he needed to find a “Tag” for himself and decided that his name would be Nemo, like the captain from Twenty thousand leagues under the sea, the main character from one of Winsor McKay’s first comic strips, and, last but not least, like the Latin word for “no one” which makes his work even more mysterious. He added ’s, the possessive case, so the translation goes from “no one” to “no one’s” and this complete the paradox of this way to identify himself. He began to write his art name on walls, then he abandoned the writing and calligraphic aspect and started reproducing his drawings on those walls. He began to use his characters and drawings to express himself and to translate his ideas into something visual that he couldn’t express with words. In his artistic career he found interest in colours and recycled paper and found himself figuring out how he could “paint” his drawings. So far he had only used spray paint and acrylic colours but paper had something else to it, it was alive. His work is divided into essential and graphic images, with a social message and made up characters that carry out poetic and surreal actions like characters in who knows which fairy tale. Lately he has been joining the “paper technique” with drawings with social themes.

A collection of drawings dealing with several themes of our modern times: alienation, consumerism, humanitarian wars, the power of money and of the mass media, the delusion of democracy, the violation of the environment.
The naked, flaccid, creatures painted by the young street artist who goes by the name of Nemo’s could easily be mistaken for aliens. His goal seems to be to gradually invade our spaces with bodies devoid of any individuality, bodies that can only be distinguished from one another by their poses and the metamorphoses that melt their anthropomorphic guise with shapes of animals or objects.
The look on their faces is immutable: their eyes express fear and dismay, their mouths are wide open in a permanent Munch’s scream. This doesn’t mean that these terrified invaders, apparently weak and helpless, aren’t dangerous. A cartoon comes to our mind, A Brief History of the United States of America by Michael Moore, where the conquerors first exterminating Native Americans then bringing war all around the world are portrayed as trembling and scared individuals, who are the first to attack because of their fear to be attacked. Nemo’s images actually hit and hurt us, staring at us from the city’s walls as well as the pages of this book.
What they give us back is the pitiless image of our true selves – combined with the symbolic elements of the contemporary world, they reveal the absurdity in our lives and make us look at them with disgust. A deflagrating disgust which subverts all anatomical laws, which is what happens in another illustrated book recently published by #logosedizioni: Nueva Carne, by Claudio Romo. Page after page we bump into a kneeling man crying with his back turned into a face, an enormous mouth wide open to show teeth that look like faces, and then doubled and multiplied faces, sponge-faces dotted with eyes or torn by countless screaming mouths ironically introduced by the word silence, a grey shadow-face showing a scared tongue-face etc. It is the subconscious that breaks free, our monstrous ego that comes to light as the second half of the half-men that wakes up screaming, approaches screaming in Halber Mensch by Einstürzende Neubauten. (Half man / see your second half / which for no apparent reason / wakes up screaming approaches screaming / you don’t see it / riveted on evening programs).
The subconscious rises up and reveals the mechanisms we fall prey to, without leaving out the oxymoric concept of humanitarian war, the illusion of democratic vote, environment’s violations. Some of the most effective images of the whole book are those dedicated to this last point, in which the overbuilding and savage use of concrete is personified as a body swallowing a tree and shitting a building, only to be punished in the following images by a vegetation that violates him in turn. All these elements can be brought back to a single, main player: the market, true lord of the world that doesn’t only reduce people to mere producers and consumers of goods but actually turns them into goods, to be used and thrown away on demand. This is what seems to suggest the image of a vending machine selling bodies, with an arm sticking out of its door, ready to be caught by a buyer. In another image, a beheaded body stands in front of a claw machine, trying to catch a head from a heap. Bodies and heads are hollow, deprived of any thought as the one on the following spread bearing the tag “on sale”. Human beings who have given up their critical thinking agree to be sold without even reacting, and are ready to buy other human beings. Time by time they become tools or use other people as tools, as we can see in the heads-shoppers carried by another beheaded creature. The anatomical details reveal fingers in the form of keys or pencils, mouths in the form of a lock, smashed heads that spill money like a moneybox. Money recurs throughout the entire book, in the form of coins inserted into slot-eyes, or replacing all dreams and ideals inside people’s heads. It is the most refined and complete form of lobotomy carried out by the media, first of all by the television. This blends and melts with religion in the group of images dedicated to this theme, which are introduced by a body pierced by television antennas as Saint Sebastian is by arrows. Each image deserves to be analysed and discussed, each one leaves its mark, raises questions and awakens our conscience in a book that condenses our disgust towards our so-called civilized society, a society that deprives us of our humanity and turns us into cannon fodder.