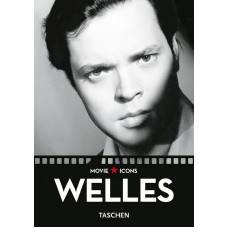 A recognized prodigy at age 10, world famous by age 23, Orson Welles was a triple magician of theater, radio, and film—and by age 25 a promising figure in American politics. President Franklin Roosevelt encouraged him to try a run for the Senate; newspaper tycoon William Randolph Hearst branded him a pariah. But by the time he turned 30, Orson Welles’ professional success ended irreversibly; from then until the day he died, he endured ridicule and reproach over what many judged his “failure.” Few knew how feverishly he had persisted as an independent filmmaker. Now, decades after his death, “new” work keeps emerging, and his reputation as an undefeated genius and creator only grows.

The Movie Icon series: People talk about Hollywood glamour, about studios that had more stars than there are in heaven, about actors who weren’t actors but were icons. Other people talk about these things, TASCHEN shows you. Movie Icons is a series of photo books that feature the most famous personalities in the history of cinema. These 192-page books are visual biographies of the stars. For each title, series editor Paul Duncan has painstaking selected approximately 150 high quality enigmatic and sumptuous portraits, colorful posters and lobby cards, rare film stills, and previously unpublished candid photos showing the stars as they really are. These images are accompanied by concise introductory essays by leading film writers; each book also includes a chronology, a filmography, and a bibliography, and is peppered with apposite quotes from the movies and from life.