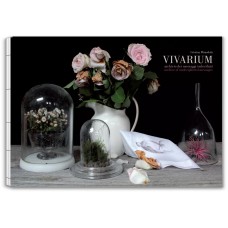 Found objects preserving memories of places and sensations, where experiences crystallize. Objects bought or received as gifts, inherited, marked by handovers, by the lives they have passed through. And even books, whose titles and covers are keys to worlds to explore and share. Human creations living side by side with nature’s artworks, here represented by plants, cut flowers in bright colours and, above all, by the charm of exemplars under glass, a modern version of the Victorian Wardian Case. There are also references to the animal kingdom: shells, biro drawings representing little birds on white cotton handkerchiefs, goldfish swimming in a glass sweet bowl and an exemplar of Felis silvestris catus knows under the name of Nina. All these are messages – undeciphered and therefore to be deciphered building up stories starting from the captions or inventing entirely new and personal ones. They contain the energy of a moment, a memory, or simply the energy of a gaze that alights upon them. They establish relations creating small ecosystems. They are skilfully arranged according to correspondences of shapes and colours, becoming the subjects of wonderful pictures that represent them both as a whole and lingering on details with close-ups that capture the beauty and the evocative power of each and every element. The books range from the refined minimalism of composition nr. 1, where small enamelled ceramic ovals are like film stills of a seduction scene, to the country patterns in warm shades of nr. 34 where roses provide an accent shade, by way of the vintage themes of nr. 13, where the red prevail, and of the soft curved lines of nr. 21, a black and white composition with strokes of green. The borders between one human being and another are like the Earth’s atmosphere, which burns up the heavenly bodies reducing them to flashes and dust before they reach the Earth. And so each one of us has to try to decipher the messages of others, collecting the flashes and archiving the dust. So let yourself be reached by these messages, delicate and strong as a wind-carried seed which travels the sky, and let them germinate and bud inside you as in the embrace of the earth.