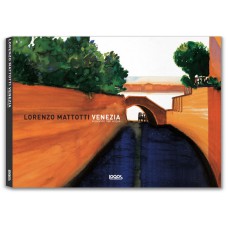 A prestigious and finely designed hardcover book portrays an unusual and fascinating Venice. Alternating black and white drawings and evocative colour images openly inspired by Hockney’s paintings, Mattotti saves the town from the stereotyped postcard images we all know and strips it of its architectural majesty to explore it in depth in search for the signs that can reveal its inner structure. The route where he drags the observer is a vertiginous maze, an intricate tangle of lines, nervous strokes, elongated or twisted perspectives. Surprising views interpreted in a variety of techniques – from pencil drawings to Indian ink, from pastels to Ecoline inks – guide us into the heart of the town, among bridges, narrow streets, openings, railings, brick walls, stairs and of course the ever-present water, with its waves and glares. In spaces mostly desert, where we walk holding our breath, from time to time mysterious figures appear, dragons, fishermen capturing monsters, inspired by the great paintings from the past, and especially by Carpaccio and Tiepolo. As Claudio Piersanti explains in the introduction, we are amazed by something that we have always had before our eyes, and shows us “surprisingly, a Venice that is familiar yet never seen before”.