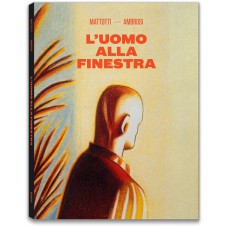 The first graphic novel by Lorenzo Mattotti is now reissued by #logosedizioni as the starting point of a publishing project which aims to go over the artistic development of the best loved Italian illustrator. A novel made of words and black and white images looking vague and evoking, creating blank spaces for the reader to fill.
The protagonist of the story is a “soft-eyed” sculptor with an elusive personality; from his window over the roofs he observes the small universe of the changing town and imagines different lights and far-off daily lives. His existence is intertwined with the lives of a few characters who offer him the opportunity to reflect, especially about himself. Three female figures stand out among them:  Irene, the ex-wife with whom he has a tender and unresolved relationship; Aurora, a casual meeting culminating in a passionate sexual intercourse; the botanist Miriade who tends to her greenhouse waiting to receive the plants that her sweetheart sends her from his travels. Among the male characters, the hospitalized philosopher friend, the “breaker” who cannot bear the effect of the artworks and feels the urge to destroy them, the professor who cowardly eludes the affection of Miriade.
These relationships are explored side by side with the theme of artistic creation which, like human relations, does not aim to “originate other solidities or certainties, but to make different things lightly touch each other, and touching each other create something else”.
All these tensions take shape in the poetic dialogues written by Lilia Ambrosi and in the images where the rarefied contours of the figures drawn with a thin ballpoint pen coexist with the accurately accomplished urban geometries, while the strokes flake apart, also in the architectures, under the pressure of weather disturbances, and explode in the sequences about nightmares, echoing the technique of Jackson Pollock and anticipating the style of Mattotti in Hansel & Gretel and Oltremai.

“Some people remain on you like scars” explains the protagonist to his friend Miriade.
And the same can be said about this book.

Born in Trieste in 1957, Lilia Ambrosi graduated from grammar school and afterwards earned a degree in foreign languages and literatures. She moved to Milan where she lived for about ten years working in the publishing industry, in particular for an Arabian children’s publisher. She wrote a few handbooks and translated several books. She collaborated with several illustrators contributing the text and script to comic books published in Italy and abroad. In Bologna she worked within the editorial department of the magazine of culture and comics Dolce Vita, directed by Oreste del Buono. In Milan, she taught Italian to foreigners for some time. Back to the town where she was born, she collaborated with the regional office of Radio RAI talking about books and for a long time wrote for Il Piccolo, newspaper of Trieste, about art and books. For about ten years she interviewed important writers for the magazine Illywords. She is still working as a translator and has been teaching English for many years in the secondary school.