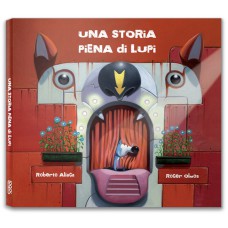 There were big wolves and small wolves.
New born… and elder wolves.

In this short story, we are thrown into a surreal universe in which the wolves of many different fairy tales live together as they wait to be invited to the next literary event. In the meantime, they spend their time as they most like. But then the lack of food calls them all to a common goal, a shared need: to satisfy their hunger! The comings and goings of the wolves from one page to the other requires the complicity and the interaction of the readers, who must hop back and forth with their 5 senses wide awake!
“Once I had read and reread the story I understood that there were no hints of space and time, which made it perfect for me...” says the Catalan illustrator Roger Olmos who – freed from this constraint – has recreated a cheerful and wacky world. For this reason, when we enter this world of wolves we feel like we are entering a playground. The illustrator argues that this universe made of platforms, houses, bridges and sculptures that fit together like the pieces of a puzzle and look like a futuristic film set might frighten the reader. As a counterpoint to a cover looking “a little bit  aggressive” Roger Olmos introduces a shy and curious little wolf who peeps out of a curtain. In so doing, he announces the element of tenderness that permeates the illustrations of the whole story and suggests that the beings that inhabit the pages of the book are not really that terrible. With this idea in mind, he avoids the dark tones that would be more appropriate for the “villains” of a fairy tale and chooses a palette of vibrant oil-colours, which ensures the reader that there is nothing to fear from these cute wolves.