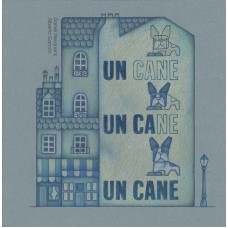 "Everyday, whether it rains or not, things happen.
Even more if we walk with a dog.
Discover in the pages of this book
the magic of the everyday. And don’t forget your umbrella,
in case of rain".

On the squared paper of a worn-out sketchbook, among stains and tears, a cityscape takes shape. Between a fruit stall and an underground station, in the city traffic made of cars and a cubist, destructured crowd, a lady walks her dog that can forecast rain. Words and images merge in a greyscale, and an orderly cover of raindrops is the background to improbable encounters, which the reader will discover page after page

The illustrator:
Daniel Nesquens was born at the end of last century but he’s never really grown up. He began writing by chance: he first found a pen, then a sheet of paper. And then, just around the corner, an idea to start with.
His friends say he is funny, but sometimes he becomes melancholy, as if he got stung. That’s life. Oh, his favourite colour is Helsinki-green.
He has written more than twenty books, some of which have been translated into more than six languages.
White Raven selections: Hasta casi cien bichos (2002), 6 colores (2006), Una nube (2006), Mi familia (2007), Un perro en casa (2013).
Other awards: best illustrated album awarded by the City of Alicante, 2002, with Mermelada de fresa; 2nd best illustrated album awarded by the City of Alicante, 2006, with Papá tenía un sombrero; 1st prize Anaya, category: children’s literature, 2010, with El hombre con el pelo revuelto; 1st prize Barco de vapor, editorial sm, 2011, with Mi vecino de abajo; best illustrated album awarded by the City of Benicarlo, 2014, with Una casa distinta.

The author:
Alberto Gamón was born in Alcañiz, Teruel, Spain, in 1974. Since 1995 he has been working as an illustrator in many fields. As a commercial illustrator he has participated in many public campaigns. After working for 15 years in the publishing industry, illustrating editorials for El Periódico de Aragón, during the last years he has also started illustrating novel covers.
His works have been featured in many exhibitions, such as “ILUSTRÍSIMOS. Panorama de la ilustración infantil y juvenil en España” (Bologna Children’s Book Fair, 2005) and “Patria común. Delibes ilustrado”, traveling exhibit hosted by the Instituto Cervantes centres around the world.
He runs illustration workshops for both children and adults and takes part in many different educational projects.