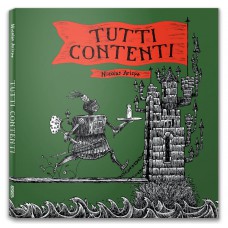 A crowd of funny characters – drawn with the elegant black and white hatching in Indian ink so typical of Arispe – throws the unadorned white pages of this new volume into disarray. They are running frantically, passing one another a tray with a bottle. They are concerned, they are concentrated: it is a matter of life or death, if they don’t arrive in time heads will roll!

The first one is a knight with a strange ramshackle armor from which unexpected details emerge: a carrot stuck in the helmet, a pair of underpants with hearts that hang behind his back, a funnel to protect each elbow. He is followed by a row of equally eccentric characters: the chamberlain (with large keys hanging from belts and bracelets), the cook (darting resolutely inside a big cauldron on wheels), the damsel (decently trying to hold her clothes), the witch (flying on a broom), the crocodile of the moat (elegantly dressed up for the occasion) and many others, ending with a young squire who particularly resembles the clumsy Wart of The Sword in the Stone. But where do they go, all these fairy-tale beings that seem to come from the pages of a chivalrous poem? What is in the bottle and to whom are they bringing such a precious drink?

Dedicated to his daughter Francisca, “little amazon” who is unaware of all this turmoil, Tutti contenti (All Happy) is a sweet and amusing metaphor on what we are ready to do in order to satisfy the wishes of those we love most. Nicolás Arispe was born in Buenos Aires in 1978 and studied drawing and visual arts at the Instituto Universitario Nacional de las Artes (IUNA).
Since 1997 he has worked for TV and movie producers, taking part in the creation of animated movies and cartoons, distributed in Argentina, Brazil, Mexico and Spain, in the design of CD and book covers and in some editorial projects.
His first illustrated book dates back to 2005; since then, he has created several other books and illustrated the work of various writers, among which María Teresa Andruetto, Alberto Laiseca and Alberto Chimal, published in Argentina, Mexico, France, Italy, Guatemala, Spain, etc.
During his career he has been awarded by the ALIJA (Asociación de Literatura Infantil y Juvenil de la Argentina), the Argentinian section of IBBY (2005 and 2016), by the Banco del Libro de Venezuela (2013 and 2018), by the Cámara Nacional de la Industria Editorial de México (2013 and 2016), and by the Feria Internacional del Libro de Bogotá (2016), and has been selected for the White Ravens 2016 catalogue by the International Youth Library. In 2018 he entered the IBBY Honour List for his work as an illustrator.
Since 2001 he has been teaching art to children, teenagers and adults.
For #logosedizioni has published: La madre e la morte / La perdita (2016), Il Libro sacro (2017), Lasciate ogni pensiero voi ch'intrate (2018), Tutti contenti (2019), Atti della gloriosa compagnia dei martiri (2019), Lungo è il cammino (2019) and El árbol (2020).