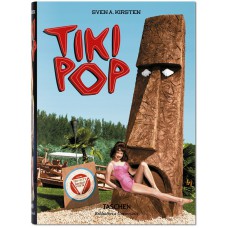 Urban islands and bamboo hideaways set the stage for a pop culture phenomenon like no other. In mid-century America, the imaginative appeal of Tiki penetrated fashion, music, eating, drinking, and architecture.

Tiki Pop traces the development of Tiki as romantic vision and cultural appropriation. Follow Tiki from James Cook's first Pacific Island expeditions, through Gauguin's exotic paintings, Hollywood jungle fantasies, and elaborate temples erected to celebrate Tiki as the god of recreation. With hundreds of images, Tiki the pop icon unfolds from its earliest, enthusiastic beginnings to its spectacular downfall in the dawning awareness of the Western world's colonial misdeeds.

This book is the culmination of the extensive research of Sven Kirsten, urban archaeologist, Tiki sage, and author of earlier TASCHEN books, The Book of Tiki and Tiki Modern, which first recovered the figure of Tiki from obscurity. In his widely lauded graphic style, Kirsten places venerable ancient godheads next to their Polynesian pop counterparts, movie posters next to matchboxes, comic strips next to Robinson Crusoe illustrations. The result is at once a visual feast, a piece of cultural history, and a tribute to a very particular vision of paradise.

The author:
Sven Kirsten was conceived on a freighter of his grandfather's Hamburg-Chicago Line. Following the call of the big world, he moved to California at the age of 25. Kirsten studied at the American Film Institute in Los Angeles and began shooting music videos in the late 1980s for The Cramps, Tom Waits, Sergio Mendes and others. After years of hunting down pieces of the puzzle of Polynesian Pop, Kirsten has developed a singular insight into the Cult of Tiki and has become the country's most eminent Tiki archaeologist.

About the series:
Bibliotheca Universalis—Compact cultural companions celebrating the eclectic TASCHEN universe at an unbeatable, democratic price! Since we started our work as cultural archaeologists in 1980, TASCHEN has become synonymous with accessible, open-minded publishing. Bibliotheca Universalis brings together more than 100 of our all-time favorite titles in a neat new format so you can curate your own affordable library of art, anthropology, and aphrodisia.
Bookworm’s delight—never bore, always excite!