THEUERDANK. THE EPIC OF THE LAST KNIGHT 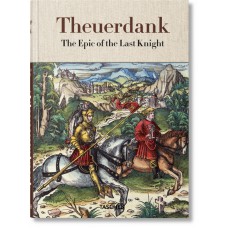 The Last Knight
The legendary tales of Emperor Maximilian, the first ruler to employ the new possibilities of book-printing

The amazing tales of the knight Theuerdank and his companion Ehrenhold constitute the last great epic verse of the late Middle Ages. The courageous knight’s journey to woo his future wife, Mary of Burgundy, and his triumph in battles and other perilous acts of bravery are the focus of this highly embellished “real-life” story of Emperor Maximilian I (1459–1519).
A king of Germany before becoming Holy Roman Emperor in 1508, Maximilian was a great patron of the arts, but also the first modern-age ruler to recognize its potential for propaganda. He commissioned a trilogy of luxurious illustrated books to immortalize his existence, among them Theuerdank—the only volume to be published during his lifetime, composed by Melchior Pfinzing, based on Maximilian’s rather fanciful draft.
The 118 ornate, gold-adorned woodcuts—one for each chapter—were made by Hans Burgkmair the Elder, Hans Schäufelein, and Leonhard Beck, while the typeface (known as the Theuerdank typeface and marked by striking “elephant trunks”) was especially designed for the book by the printing workshop of Hans Schönsperger the Elder.

This edition, inspired by an extremely rare hand-colored original from the Bayerische Staatsbibliothek, Munich, comes with an essay by Stephan Füssel (covering Maximilian’s life and work, as well as his role in the art of printing and use of printed materials) and selections from Melchior Pfinzing’s clavis, or “key,” which was included in the original to kindly point out to Maximilian’s contemporaries exactly what part of the tales were more fiction than fact.
The collection also showcases the famed “elephant trunks” typeface in double-spread fascimiles—true to the original down to every stain and smudge. A chapter-by-chapter retelling of the tales in modern vernacular sheds light on the narrative strategy and real events behind the allegories.

“A tremendous and now quite affordable feast for the eyes.”
— Süddeutsche Zeitung, Munich

The editor:
Stephan Füssel is director of the Institute for Book Studies at the Johannes Gutenberg University in Mainz, and holder of the Gutenberg Chair at the same university. He has published prolifically on the early days of printing, the sale and publication of books between the 18th and 20th centuries, and the future of communications.