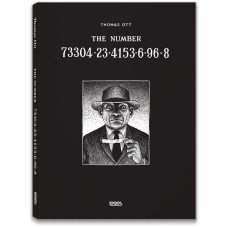 After carrying out the execution of a death-sentenced prisoner, an executioner finds a piece of paper next to the electric chair with a sequence of numbers written on it and, captivated by the potential enigma, he decides to take it with him. From that moment on the numbers start to show up all around him in the exact order in which they are written, marking each and every moment of his days. At first they seem to bring a lucky turn of events in his life: after finding a lost puppy, the man begins a romantic relationship and wins a big sum at the casino thanks to the very numbers he found. But after a happy night, the morning brings along an abrupt change and the number sequence starts causing a chain of misfortunes leading to a terrible conclusion that activates an inescapable cyclical mechanism. And so the meaning of the quote that opens the book like an epigraph suddenly becomes clear: “Good people are always convinced of their rightness”.
With this graphic novel, Thomas Ott once again captures the reader/viewer with his shocking, peremptory stroke, skilfully scratched on black plates using the “scratchboard” technique. The typical rough look of the technique, which consists in covering the sheet of paper with black ink and scratching it off with a nib to make the drawing appear, is counterweighted by the richness of the details and the delicacy of the facial expressions that the artist gives to his characters. The bright strokes vigorously emerge from the darkness conveying the perfect illusion of three dimensions. Here more than ever Ott’s illustrations have a cinematic quality: they draw on the tradition of noir fiction and evoke the black-and-white charm of German Expressionist films. #TheNumber is a disturbing tale that penetrates into the reader’s mind with the enigmatic and incessant repetition of the number sequence, always present at the top of each page. A repetition that gets more and more agonizing until the dreadful ending.

Thomas Ott was born in Zurich in 1966. After compulsory school, at the age of 16 he enrolled in a school of applied arts, and already during the years of his education he started to make his first drawings on a commission basis, while at the same time creating his own comics. After gaining a diploma in graphic design, he started to earn his living as a freelance illustrator for Swiss, German and French magazines, and very soon his first comic book, Tales Of Error, was published. In 1990 he moved to Paris, where he could gain all those experiences that would have been precluded to him in the quiet city of Zurich. Nevertheless, over time he felt the need to resume studying, this time at a film school. But he didn’t like any school in Paris, so he decided to go back to Zurich, where he enrolled in the Zurich’s School of Art and Design (HGKZ) and where he still lives. Since 2007 he has been a teacher at the Zurich University of the Arts (ZHdK).
His books for #logosedizioni are: R.I.P, Cinema Panopticum and The Number.