THE LITTLE BOOK OF PUSSY 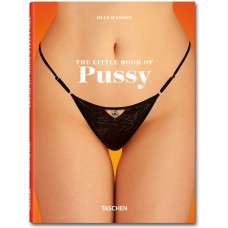 From the time The Big Penis Book was published, readers anticipated The Big Book of Pussy. Granted, perhaps not the same readers, but the seed had been planted and the calls and letters began flowing in. Once they had that long-awaited book, some found themselves overwhelmed by the variety and abundance, as well as the sheer size of the book. As one reviewer wrote, "let’s give credit to Amazon for…the strength of its packaging. Who wants a 2-ton pussy book being ’exposed’ for the mailman…?"

For those who worry that there can be too much of a good thing, we’ve made a pared down, "best of" edition of The Big Book of Pussy, a petite little kitten of a book that puts those in-your-face photos in proper perspective. Now you can follow the evolution of genital exposure with ease, through 100 years of photos with one thing in common: the exhibitionistic pleasure with which the models present their feminine pulchritude. And with over 150 photos - 36 new to this book - of the pet we love to pet, no bothersome text to interrupt the flow, all in a package that won’t stress the mailman’s back, we just may have produced the perfect self-gifter of the year.

THE LITTLE BOOK OF BIG BREASTS
8.00€
Add to Cart