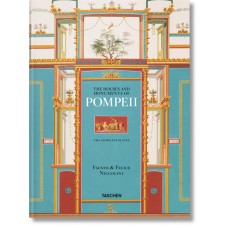 Rising from the ashes
A meticulous record of the city that lay buried for 1,600 years

First published by Fausto and Felice Niccolini between 1854 and 1896 in Naples, Le case ed i monumenti di Pompei: disegnati e descritti aimed to illustrate all aspects of life in the ancient city buried in just 24 hours by the catastrophic eruption of Mount Vesuvius and preserved under ash for over 1,600 years.
Both the Niccolini brothers had a keen sensibility for this archaeological marvel. Before engaging in their editorial venture, Fausto worked under his father, the well-known architect Antonio Niccolini, while Felice worked in the Museo Nazionale di Napoli. The pair went to great effort to represent the context of each found object, so that readers could appreciate each building, monument, and object not just as a wonder for scholarly analysis but as a vivid part of daily experience in the Roman Empire, from busy streets to intimate domestic spaces.
The ambitious collection was also influenced by the collaboration and revolutionary archaeological methods of Giuseppe Fiorelli, the first to organize Pompeii into nine regions (regiones), subdivided into building blocks (insulae), and a pioneer of uncovering buildings layer by layer, so as to maintain the integrity of each site. Most famously, Fiorelli created the unforgettable plaster casts of human remains that are displayed at Pompeii to this day.
This reprint assembles the near 500 lithograph plates of Le case ed i monumenti di Pompei offering a fascinating record not only of the ancient, buried, and preserved city, but also of its emerging excavation and its vast influence on Western art and imagination.

The authors:
Valentin Kockel studied classical archaeology and obtained his doctorate in 1978 with a thesis on the necropolises of Pompeii. He has worked at the German Archaeological Institute in Rome, the Technical University of Darmstadt, and as Professor Emeritus at Augsburg University. Kockel has headed excavations in Ostia Antica and at the Forum in Pompeii.

Sebastian Schütze was a longtime research fellow at the Bibliotheca Hertziana (Max Planck Institute for Art History) in Rome. He is a member of the academic board of the Istituto Italiano per gli Studi Filosofici in Naples, and a corresponding member of the Österreichische Akademie der Wissenschaften. From 2003 to 2009 he held the Bader Chair in Southern Baroque Art at Queen’s University in Kingston. In 2009 he was appointed Professor of Early Modern Art History at Vienna University.