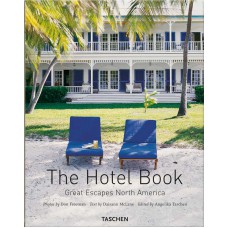 From dazzling cities to eccentric small towns, from vast mountains to plains as far as the eye can see, Canada and the United States offer an awe-inspiring abundance of travel adventures. In this discerning hotel guide, Angelika Taschen guides you on your way, scouring the North American continent for the most extraordinary, elegant, and inspiring places to rest your head.

Coast to coast, from North to south, spanning the rustic, the boutique, the period-piece and the architectural gem, this is the ultimate directory in tasteful accommodation. Special highlights include raised safari tents in California’s El Capitan Canyon, a historic ranch nestled in a Death Valley oasis, a Frank Lloyd Wright house overlooking Mirror Lake, Wisconsin, and a 1930s hotel in Texas where James Dean once stayed.

The editor:
Angelika Taschen studied art history and German literature in Heidelberg, gaining her doctorate in 1986. Working for TASCHEN from 1987 to 2010, she has published numerous titles on art, architecture, photography, design, travel, and lifestyle.

Don Freeman is a New York-based photographer whose work appears regularly in Vogue, The World of Interiors, AD France and Architektur & Wohnen. Recently, he photographed Ted Muehling`s collaborations with Nymphenburg porcelain and Stuben glass. His work appears in galleries in the United States and in the collections of the Victoria Albert Museum in London, the Getty Museum in Los Angeles and others.