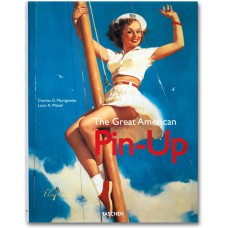 Pictures from an age when eroticism was still innocent

They’ve been exciting generations of men, on calendars and covers, as centrefolds or even on playing cards: pin-ups. What started as an exercise in oils was soon taken up in various media - pin-up mascots graced the fuselages of American fighters, and became an essential feature of the male world of garages and barracks. And the age of political correctness hasn’t ended their appeal.

This book tells the tale of a genre as utterly American as the paintings of Edward Hopper, describing its origins and development in detail and showcasing the most important artists. With over 500 illustrations, The Great American Pin-Up is a comprehensive studies of the genre.
The authors:
Charles G. Martignette was an art dealer and collector of original paintings by 20th century American illustrators and artists. His gallery in Hallandale Beach, Florida, housed the world’s largest collection of commercial illustration art. As of 1975 he published numerous articles about magazine, advertising, calendar, pulp, paperback, glamour and pin-up art. Paintings from his collection have been exhibited at the Smithsonian Institution as well as many other American and European museums. Charles G. Martignette died in 2008 in Hallandale, Florida.

Louis K. Meisel, owner-manager of one of the oldest galleries in New York’s Soho, has published several books and articles on contemporary art. In addition to art, he collects pin-up work.