login | create an account
Categorie
Home » D'HANCARVILLE. THE COMPLETE COLLECTION OF ANTIQUITIES FROM THE CABINET OF SIR WILLIAM HAMILTON

D'HANCARVILLE. THE COMPLETE COLLECTION OF ANTIQUITIES FROM THE CABINET OF SIR WILLIAM HAMILTON 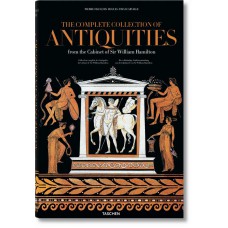 This spectacular compilation of plates, representing a superb collection of ancient vases, is the fruit of a collaboration between Sir William Hamilton (1730-1803), British diplomat and collector, and Pierre-François Hugues d`Hancarville (1719-1805), an adventurous connoisseur and amateur art dealer. As an envoy to the British Embassy in Naples, Hamilton developed a keen interest in both antiquity and volcanology, studying the royal excavations of Pompei and Hercolano and publishing the first scientific essays on mount Vesuvius. During his stay in Naples he built the finest collection of ancient vases of his time, which he sold, in 1772, to the British Museum in London. Before the invaluable pieces were shipped off to England, d´Hancarville was commissioned to document the vases in words and images. Never before have ancient vases been represented with such meticulous detail and sublime beauty. His famous catalogue was published in four volumes, known as "Les Antiquités d´Hancarville." Complete sets of these rare volumes today fetch top prices at auction. We have borrowed a fine copy from the Anna Amalia Library in Weimar to reproduce in exacting detail, so that modern readers can experience the same images that sparked Britain`s, and indeed Europe`s, taste in classical style and inspired reproductions from pottery manufacturers such as Wedgwood.