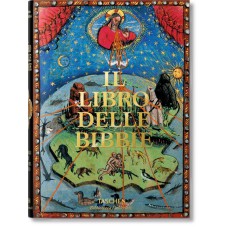 Let there be light
Medieval bible manuscripts in impeccable reproduction

In the beginning was the word, and in the Middle Ages were kings, princes, and high-ranking religious members whose wealth and influence produced illustrated bibles of extraordinary craftsmanship.
This Bibliotheca Universalis edition brings together some of the finest medieval bible manuscripts from the Austrian National Library. With examples from every epoch of the Middle Ages, the collection explores visualizations of the bible in various theological and historical contexts. In impeccable reproduction quality, these stunning images may be appreciated as much as art historical treasures as they are important religious artefacts.
Texts by Andreas Fingernagel, Stephan Füssel, Christian Gastgeber, and a team of 15 scientific authors describe each manuscript in detail, exploring both the evolution of the Bible and the medieval understanding of history. A glossary of important terms is also included so that those not versed in bible history can enjoy the texts as well.

Christian Gastgeber studied classics and Byzantine studies at the University of Vienna. After receiving his doctorate in 2002, he joined the staff of the Byzantine Section of the Austrian Academy of Sciences, Vienna, specialising in Greek palaeography and diplomatics. He is editor-in-chief of Biblos, a periodical for the history of books, libraries, script, and typography issued by the Austrian National Library in Vienna.

Andreas Fingernagel studied art history and archaeology in Salzburg and Vienna. From 1985 to 1989, he worked in the Manuscripts Department of the Staatsbibliothek Preussischer Kulturbesitz, Berlin, and later took part in research relating to the cataloguing of medieval manuscripts in Vienna`s Austrian National Library. He teaches at the University of Vienna.