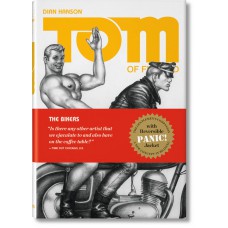 In 1953 The Wild One, starring Marlon Brando as Johnny, leader of the Black Rebels Motorcycle Club, was released worldwide. In 1954 Tom of Finland, previously known for his military and blue-collar subjects, drew his first civilian motorcyclist dressed in black leather. Coincidence? Hardly. The Wild One, originally marketed to a female audience with a poster featuring a close-up of Brando’s face sans leather cap, hair tousled, cheeks and pout tinted pink with the tagline “That ’Streetcar’ Man has a new Desire!”, resonated far more with gay audiences, who took Brando’s character as a template for the first leatherman. After seeing The Wild One Tom never drew men in brown leather again; black leather now dominated his fantasies, and his art.

In Tom of Finland Volume II—Bikers we explore Tom’s fascination with bikers through a mixture of multi-panel comics and single panel drawings and paintings, starting in the 1940s, before The Wild One fixed his taste on black leather, through the 50s, 60s, 70s and 80s. Historic film stills and posters, personal photos of Tom, sketches, and Tom’s own reference photos make this far more than another Tom’s Comics retread.

This edition’s special Panic Cover is reversible to a realistic-looking academic book to keep the real contents hidden from your annoying boss or even help you impress an attractive onlooker!!!