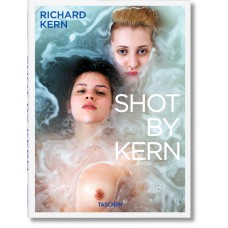 The internet video site VBS, launched by the ironic and ultra-cool American magazine Vice, features original content on a wide range of subjects dear to the hipster heart. One of the first, and still the most popular, ongoing series was "Shot by Kern," a concept dreamed up by then editor-in-chief Jesse Pearson to roust photographer Richard Kern from his New York environs and have him shoot women Kern-style around the world. In the last seven years Kern has traveled to Belgium, Brazil, Bulgaria, Canada, the Czech Republic, Denmark, France, Germany, Italy, Mexico, New Zealand, Poland, Russia, Spain, Sweden, Switzerland, the United Kingdom, and the United States with a Vice video crew. Fans follow his adventures on Vice.com, from interviewing the real women who dream of being New York Girls, through styling and shooting. What they don’t see, what no one has ever seen, are the photos that result from these video sessions.
Shot By Kern presents some 300 of these photographs for the first time. Those who’ve followed Kern’s adventures on VBS will be especially eager to lay their hands on this book, but all fans will enjoy these fresh-scrubbed amateurs in their first time before the camera. Some are shy, some are brazen, but all have that quirky cuteness Kern seeks in his subjects.
The book includes several photo series. As Richard travels the world he’s noticed cultural similarities between his models and themes have emerged, from the universality of prescription drugs, to a love of technology, to lying in bed, and peering up skirts. And because Kern has always been fascinated by what women do behind the bathroom door, there is lots of intimate personal grooming.
As with Kern’s last TASCHEN book, Action, Shot By Kern comes with an hour long video, shot and edited by Kern, with original music by Sonic Youth’s Thurston Moore, because, like Kern’s models, the modern world is always in motion.

The photographer:
Richard Kern was born in North Carolina in 1954 and has lived and worked in New York City since 1979. In the '80s he produced a series of short films that are now recognized as the central works of the movement known as the Cinema of Transgression. In the '90s he switched to still photography full time. Since 2000 he has primarily devoted himself to gallery shows and, beginning in 2005, to his VBS video series "Shot By Kern."
The editor:
Dian Hanson was born in Seattle in 1951. For 25 years she produced various men’s magazines, including Puritan, Juggs and Leg Show, before becoming TASCHEN's sexy book editor in 2001. Her many books for TASCHEN include The New Erotic Photography Vol. 2 and Robert Crumb: Sketchbooks 1982-2011. She lives in Los Angeles.