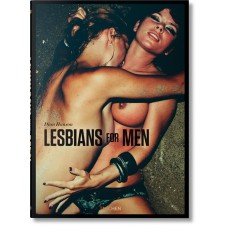 Straight men have always had a thing for lesbians, or more correctly, for essentially straight women willing to do other women for their viewing pleasure. When a man sees two women together there’s no jealousy that another man’s getting the woman he can’t, as with heterosexual porn, just the joy of everything he likes times two, and the unshakable fantasy that women that wild would surely invite him to join in.
Yes, it’s unrealistic, but that doesn’t make it any less popular, and photographers have been documenting these faux lesbian couplings for over 100 years. Lesbians For Men is the first photo book to acknowledge such photos are created to fuel male fantasy, to explore the reasons, and to trace their origins back to 1890, and forward to the present day.
Over 300 photos, in black and white and color, celebrate the obliging women who’ve kissed, fondled, and fulfilled men’s lesbian cravings, in images created for pornography as well as “fine art”. Contemporary photographers include Nobuyoshi Araki, Guido Argentini, Bruno Bisang, Bob Carlos Clarke, Ed Fox, Ren Hang, Petter Hegre, Richard Kern, Nicola Ranaldi, Terry Richardson, Will Santillo, and Kishin Shinoyama. Subjects range from simply affectionate to everything two women can do when they want to please male viewers as much as each other.