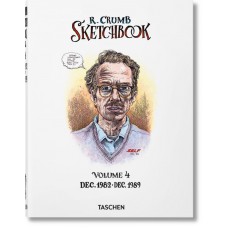 The first three volumes of this series were met with fervent acclaim from our readers, most of whom have been lying in wait for an affordable trade edition since the boxed sets appeared. They laud these 440-page editions for their quality hardcover, elegant matte paper, and impeccable reproduction as the best of the best—the perfect tribute to the world’s favorite dirty old man.
Expect this book to be no different. Combining volumes 7 and 8 from the first boxed set (confusing, we know), it spans the years 1982 to 1989, a period when the artist was comfortably ensconced in rural California, raising his young daughter Sophie, who appears throughout this volume. But Crumb was still Crumb, declaring in one drawing, above a lovingly rendered tree, “As I get older I get more twisted, convoluted, depraved, cynical, embittered, self-centered, jaded, debauched, ruthless, greedy, conceited, set-in-my-ways, long-winded, absent-minded, prejudiced, closed-minded, misanthropic, nervous…”
To prove this self-flagellating analysis he fills the pages with his signature perversions (in country settings), scathing social commentary, cruel self-portraits, experimental cubism… and some lovely sylvan landscape. His mastery of the Rapidograph pen is at its zenith here in his 40s; we only wish he’d chosen to include his prescient comic of Donald Trump from 1989.

“Like owning a piece of Crumb himself—but let’s not think about which piece exactly.”
— Zinc, New York

The artist
Robert Crumb first found fame with Zap comics in 1968. Subsequent comics include Snatch, Big Ass, Despair, Weirdo and Hup. He starred in the Oscar nominated 1994 film Crumb, and has produced many books, including TASCHEN’s Sex Obsessions.

The editor
Dian Hanson produced a variety of men’s magazines from 1976 to 2001, including Juggs, Outlaw Biker, and Leg Show, before becoming TASCHEN’s Sexy Book Editor. Her titles include the “body part” series, The Art of Pin-up, Psychedelic Sex, and Ren Hang.