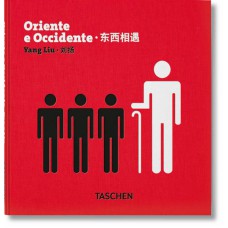 Already an online phenomenon, East Meets West is the first volume in designer Yang Liu's successful infographic series. Conceived and designed with perceptive wit and her signature graphic simplicity, Yang Liu's pictograms convey the obvious and sometimes not so obvious discrepancies in life on opposite sides of the globe.

Drawing on her own experiences of China and Europe, Yang Liu explores a rich range of differences between Eastern and Western experience, from sleeping patterns to the role of senior citizens, from leisure activities to attitudes towards beauty, property, and public space. With their clarity, insight, and fundamental fondness towards both cultures, Yang Liu's work has become not only a social media and magazine darling, but also a favorite with professional training programms around the world.