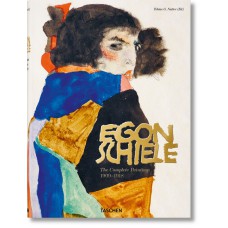 Over the course of his short life, Austrian artist Egon Schiele (1890–1918) blazed a turbulent Expressionist trail. A child prodigy, young rebel, and chronic provocateur, he caused uproar among the establishment with his contorted lines, distorted bodies, and explicit eroticism and continues to startle to this day with his unflinching images of himself and his nude, splayed subjects.
Schiele reveled in stylistic freedom and shock. In the twilight years of the Austro-Hungarian Empire, he swiftly abandoned classical figuration for a distorted and exaggerated physicality that rendered emotional and sexual truth rather than refined beauty ideals. His subjects are elongated, angular, and twisted. With protruding ribs, contorted limbs, and sickly skin, the body becomes a locus of anguish.
The only reprieve is the promise of sex. Like no other early 20th-century artist, Schiele laid genitalia bare, bringing some of the most candid renderings of the vagina in Western art history, as well as scenes of masturbation and lesbian sex.
Schiele’s life ended with the same drama and emotional turmoil that defined his work, dying of Spanish influenza in 1918 just after his pregnant wife Edith succumbed to the same pandemic. His legacy, despite the brevity of his life, is exceptional. His influence can be traced through the work of countless 20th-century masters, from Francis Bacon and Otto Muehl to Julian Schnabel, David Bowie, and Tracey Emin.
In this expansive new book, Egon Schiele. Complete Paintings, 1909–1918, we survey the complete catalogue of Schiele paintings from his most innovative and prolific decade. The 221 featured works are presented alongside biographical details, expert insights, as well as Schiele’s own writings and poems, offering intimate access to his ideas and psyche.

The editor:
Tobias G. Natter is an internationally acknowledged expert on art in “Vienna around 1900”. For many years he worked at the Austrian Belvedere Gallery in Vienna, latterly as head curator. He also worked as guest curator at the Tate Liverpool, the Neue Galerie New York, the Hamburger Kunsthalle, the Schirn in Frankfurt am Main, and the Jewish Museum in Vienna. From 2006 to 2011, he directed the Vorarlberg Museum in Bregenz, and from 2011 to 2013 was director of the Leopold Museum in Vienna. In 2014 he founded Natter Fine Arts, which specializes in assessing works of art and developing exhibition concepts. His many publication projects include Gustav Klimt. Tutti i dipinti, published by Taschen in 2012.