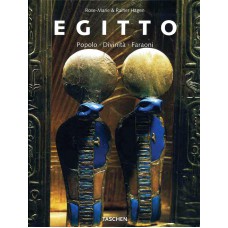 Everyday life in the Egypt of the Pharaohs

What do we really know about our ancestors? Not about the rulers and generals, but about labourers, farmers, soldiers and families. Egypt is a perfect case in point, almost a blank slate for most of us as regards details of their everyday life. This useful and informative book attempts to set the record straight by offering a distinctive take on that most mythologised of epochs.

Who would have guessed for example that the first strike in recorded history took place in 1152 BC during work on the necropolis in the Valley of the Kings, a protest by construction workers against delayed deliveries of oil and flour. Two fairly banal commodities maybe, but essential: Oil protected the skin against the savage desert climate, whilst flour was the base ingredient for thirty different kinds of nutritional cake.

It is this detailed examination of the evidence that distinguishes this volume, with chapters (all uniquely headed in the corresponding hieroglyphs) on everything from relationships to leisure activities, the role of women to the manufacture of mummies. And just like the mummies, "fragile as eggshell but solid as a statue", magically able to transcend death, so both people and country are brought alive for us again.

The author:
Rose-Marie Hagen was born in Switzerland and studied history, Romance languages and literature in Lausanne. After further studies in Paris and Florence, she lectured at the American University in Washington, D.C.
Rainer Hagen was born in Hamburg and graduated in literature and theatre studies in Munich. He later worked for radio and TV, most recently as chief editor of a German public broadcasting service. Together they have collaborated on several TASCHEN titles, including Masterpieces in Detail, Pieter Bruegel and Francisco de Goya.