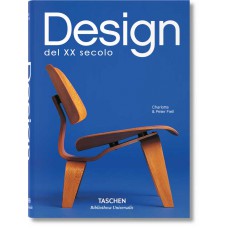 From Art Nouveau to minimalism and everything in between

Poised at the start of the 21st century, we can see clearly that the previous century was marked by momentous changes in the field of design. Aesthetics entered into everyday life with often staggering results. Our homes and workplaces turned into veritable galleries of style and innovation.
From furniture to graphics, it`s all here - the work of artists who have shaped and recreated the modern world with a dizzying variety of materials. From the organic to the geometric, from Art Deco, through to Pop and High-Tech, this book contains all the great names - Harry Bertoia, De Stijl, Dieter Rams, Philippe Starck, Charles and Ray Eames, to name only a very few. This essential book is a comprehensive journey through the shapes and colors, forms and functions of design history in the 20th century. An A-Z of designers and design schools, which builds into a complete picture of contemporary living. Lavishly illustrated, this is design in the fullest sense.