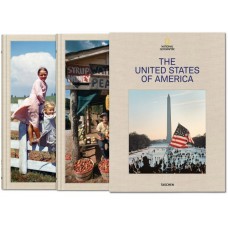 It was a bold, controversial move, which alienated the old guard, delighted readers, and signaled the future of image-led mass-market media. In 1905, National Geographic magazine, then barely 30 years old, elected to run a pictorial spread about life in Tibet. Ignoring the scandalized splutters from the more staid board members of the National Geographic Society, Editor Gilbert Hovey Grosvenor and President Alexander Graham Bell went on to build a team of staff photographers. By 1910, the magazine was regularly featuring photography, affording its readers an armchair view of lands, peoples, and cultures worldwide.
Naturally, the magazine’s home country, the United States was amply documented from the outset, and in this new TASCHEN book, we travel back in time with National Geographic’s extensive archives to take a state by state tour of the United States over the past 100 years. Following on from the critically acclaimed National Geographic: Around the World in 125 Years, the collection brings together several hundred captivating images to chart a century of change and growth from Alabama to Wyoming, Alaska to Wisconsin.
The tour starts with early black and white images and then autochrome photographs of the 1920s and 1930s, morphing into mid-century Kodachrome, then into the harder-edged reportage of the 1970s and 1980s, before shifting to digital in the 1990s through to the present. Along the way, we’re immersed in a vivid account of an evolving and contrasting America, from breathtaking landscapes to advancing industry, evocative rural life to burgeoning towns and cities.
With an introductory essay by photography editor David Walker, as well as prefaces to each state section and fascinating storytelling captions, the book celebrates not only the world’s greatest photography magazine but also the people, history, and beauty of the United States in all its kaleidoscopic glory.

The authors:
Jeff Z. Klein worked at The New York Times for 19 years as an editor and reporter. Prior to that, he was an editor at The Village Voice, and has authored several books about sports as well as writing for TASCHEN’s popular 36 Hours series. He currently divides his time between New York City and Buffalo, where he produces a series on regional history for Buffalo's NPR station.

During three decades as an editor, writer, and photographer, Joe Yogerst has lived and worked on four continents including Asia, Africa, Europe, and North America. His writing has appeared in National Geographic, Conde Nast Traveler, Travel + Leisure, the Los Angeles Times, and the International Herald Tribune among others. He has authored numerous travel guides for National Geographic, and has been the recipient of four Lowell Thomas Awards from the Society of American Travel Writers. He currently lives in a small beach town between LA and San Diego.

David Walker was born in South Dakota, and raised in New Jersey and Maine. He is the executive editor of the photography industry bible Photo District News, and a past winner of the McAllister Editorial Fellowship at Northwestern University's Medill School of Journalism. A graduate of Cornell University, he has written articles about photography and other subjects for a variety of international publications, and is a graduate of Cornell University.