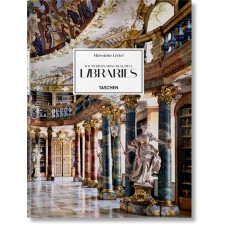 Temples of Knowledge
Exceptional access to the world’s finest libraries

From the mighty halls of ancient Alexandria to a camel bookmobile on the Kenyan-Somali border, human beings have had a long, enraptured relationship with libraries. Like no other concept and like no other space, the collection of knowledge, learning, and imagination offers a sense of infinite possibility. It's the unrivaled realm of discovery, where every faded manuscript or mighty clothbound tome might reveal a provocative new idea, a far-flung fantasy, an ancient belief, a religious conviction, or a whole new way of being in the world.
In this new photographic journey, Massimo Listri travels to some of the oldest and finest libraries to reveal their architectural, historical, and imaginative wonder. Through great wooden doors, up spiraling staircases, and along exquisite, shelf-lined corridors, he leads us through outstanding private, public, educational, and monastic libraries, dating as far back as 766. Between them, these medieval, classical, baroque, rococo, and 19th-century institutions hold some of the most precious records of human thought and deed, inscribed and printed in manuscripts, volumes, papyrus scrolls, and incunabula. In each, Listri’s poised images capture the library’s unique atmosphere, as much as their most prized holdings and design details.
Featured libraries include the papal collections of the Vatican Apostolic Library, Trinity College Library, home to the Book of Kells and Book of Durrow, and the priceless holdings of the Laurentian Library in Florence, the private library of the powerful House of Medici, designed by Michelangelo. With meticulous descriptions accompanying each featured library, we learn not only of the libraries’ astonishing holdings - from which highlights are illustrated - but also of their often lively, turbulent, or controversial pasts. Like Altenburg Abbey in Austria, an outpost of imperial Catholicism repeatedly destroyed during the European wars of religion. Or the Franciscan monastery in Lima, Peru, with its horde of archival Inquisition documents.
At once a bibliophile beauty pageant, an ode to knowledge, and an evocation of the particular magic of print, Massimo Listri Libraries. Memories of the World is above all a cultural-historical pilgrimage to the heart of our halls of learning, to the stories they tell, as much as those they gather in printed matter along polished shelves.

“Listri’s meticulous attention to minutiae and details is exquisite. One can practically smell the dust on these ancient books.”— Artology

The authors:
Elisabeth Sladek studied Art History in Vienna, Classical Archaeology and Judaic Studies and wrote her dissertation at the Max Planck Institute in Rome. Her special field is the history of the Baroque art and architecture and she is an active researcher and teacher, among others in Vienna, Rome and Zurich. She also publishes regularly on the respective themes.

After studying history, German language and literature, education and philosophy, Georg Ruppelt gained his PhD with a doctoral thesis on Friedrich Schiller. He subsequently worked as a librarian, becoming deputy director of the Herzog August Bibliothek in Wolfenbüttel in 1987, and director of the Gottfried Wilhelm Leibniz Bibliothek in Hanover from 2002 to 2016. Ruppelt has published over 400 essays and 40 monographs on the subject of books, library science, and cultural history.