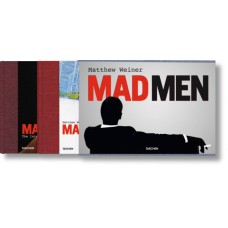 With its brilliant writing, spot-on acting, faultless art direction, impeccable costume design, Mad Men is a landmark for cable television. Never before has a period series offered such compelling plotlines alongside such painstaking attention to detail and accuracy. As the show's personal and professional machinations evolve, so too are the minutiae and the milestones of history in motion, from the shifting height of hemlines to the struggles of the civil rights movement.

From the plot twists that took our breath away, to the unforgettable outfits; from the shapes and textures of ‘60s decor to to the very real intricacies of relationships, discover the ideas, inspirations, and talents that brought human lives and human history together on the small screen.

The author:
Los-Angeles born Matthew Weiner is series creator, executive producer, writer, and director of the critically acclaimed, award-winning drama Mad Men. Weiner’s additional credits include serving as an executive producer and writer on The Sopranos, and as writer on various television comedy series including The Naked Truth, Becker, and Andy Richter Controls the Universe. Weiner’s feature film Are You Here was released in 2013. He lives in Los Angeles with his wife, architect Linda Brettler, and their four sons.