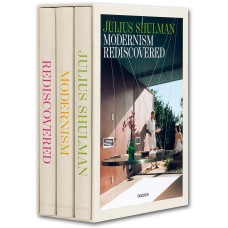 The Master of Modern
More discoveries from the Julius Shulman vaults

With masterful sensitivity to structure, function, and design, Julius Shulman’s photography was instrumental in crafting the image of the midcentury Southern California lifestyle across the United States and around the world. In 2000, TASCHEN’s Modernism Rediscovered brought to light for the first time forgotten architectural masterpieces drawn from Shulman’s personal archives. Capturing many residential and commercial buildings that had slipped from public view, these pictures uncovered a rarely seen side of California modernism and revealed quite how unique and instrumental Shulman had been in capturing and disseminating modernist aesthetics.

This extensive, three-volume edition follows up on that remarkable volume, bringing over 400 more architectural gems into the spotlight. Each project and photograph in these volumes was personally selected from over 260,000 photographs by publisher Benedikt Taschen, who enjoyed a close collaboration with the photographer since first publishing Julius Shulman: Architecture and Its Photography (1998). Not just restricted to the West Coast this time, the images were taken all across the United States as well as in Mexico, Israel, and Hong Kong.

Augmenting the photographs are an introduction by photography critic Owen Edwards, an extensive biography by University of Southern California historian Philip J. Ethington, captions on decorative elements by Los Angeles Modern Auctions founder Peter Loughrey, biographies of key architects, and personal reflections from the photographer himself. Arts writer Hunter Drohojowska-Philp conducted months of interviews with Shulman to construct an informative and lively oral history and portrait of the times.

The artist:
American photographer Julius Shulman’s images of Californian architecture have burned themselves into the retina of the 20th century. A book on modern architecture without Shulman is inconceivable. Some of his architectural photographs, like the iconic shots of Frank Lloyd Wright’s or Pierre Koenig’s remarkable structures, have been published countless times. The brilliance of buildings like those by Charles Eames, as well as those of his close friend, Richard Neutra, was first brought to light by Shulman’s photography. The clarity of his work demanded that architectural photography had to be considered as an independent art form. Each Shulman image unites perception and understanding for the buildings and their place in the landscape. The precise compositions reveal not just the architectural ideas behind a building’s surface, but also the visions and hopes of an entire age. A sense of humanity is always present in his work, even when the human figure is absent from the actual photographs. Today, a great many of the buildings documented by Shulman have disappeared or been crudely converted, but the thirst for his pioneering images is stronger than ever before.

The authors:
Hunter Drohojowska-Philp writes about modern art, design, and architecture. She is a regular contributor to Artnews, Artnet, Western Interiors and Design, and the Los Angeles Times and is the author of Full Bloom: The Art and Life of Georgia O’Keeffe.

Owen Edwards has written about photography for 30 years for numerous publications including American Photographer, New York Times Magazine, and Smithsonian.

Philip J. Ethington is professor of history and political science at the University of Southern California and North American editor of the journal Urban History. He is currently completing a large-format graphic book and online publication called Ghost Metropolis, Los Angeles, 1542–2001.