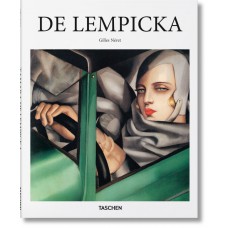 Tamara de Lempicka (1898–1980) stood at the center of the sophisticated Paris art world of the 1920s and 30s. Her love for beautiful women, elegant automobiles, and the modern metropolis provided not only motifs for her pictures, but also influenced her artistic style.
Simultaneously with her career as artist, Tamara de Lempicka pioneered a new image of life on the screen, evident in the new, self-confident woman and the changing aspects of femininity and masculinity. The same sense of style was reflected in a futuristic cult of speed, domestic design forms promulgated by the Bauhaus, and the dandyism of a George Brummell. Tamara de Lempicka’s best-known painting, Self-Portrait, or Tamara in a Green Bugatti, presents the artist as a female dandy brimming with cool elegance.
Whether as an Art-Déco artist, a post-Cubist or a Neoclasissist, de Lempicka struck the taste of a cosmopolitan (and wealthy) public that found its own image reflected in her work.