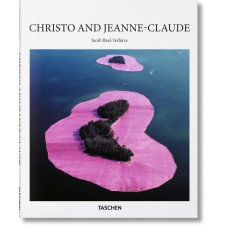 The work of the artist couple Christo (born 1935) and Jeanne-Claude (1935–2009) resists categorization. It is a hybrid of art, urban planning, architecture, and engineering, but above all an aesthetic uniquely their own: surreal and ethereal environmental interventions that have graced monuments, public parks, and centers of power alike.
This compact book spans the complete career of the couple who were born on the very same day, met in Paris, fell in love, and became a creative team like no other. With rich illustration, it spans Christo and Jeanne-Claude’s earliest projects in the 1950s right through to The Floating Piers, to be installed at Lake Iseo, Italy, in 2016. The book celebrates all of the couple’s most famous environmental interventions, such as The Gates in New York’s Central Park and the Wrapped Reichstag in Berlin, while also featuring early drawings and family photos unknown to the wider public.

Christo & Jeanne-Claude have worked in collaboration since 1961, and lived in New York City since 1964. Their large-scale projects include Wrapped Coast, Australia, 1968–69, Valley Curtain, Rifle, Colorado, 1970–72, Running Fence, Sonoma and Marin Counties, California, 1972–76, Surrounded Islands, Biscayne Bay, Florida, 1980–83, The Pont Neuf Wrapped, Paris, 1975–85, The Umbrellas, Japan–USA, 1984–91, Wrapped Reichstag, Berlin, 1971–95, Wrapped Trees, Riehen, Switzerland, 1997–98 and The Gates, Central Park, New York City, 1979-2005. Jeanne-Claude died in 2009.
The author:
Jacob Baal-Teshuva, born 1929, is author, critic and independent curator of museum shows. He studied at the Hebrew university in Jerusalem and New York University. His numerous publications include works on Marc Chagall, Alexander Calder, Jean-Michel Basquiat, Andy Warhol and Christo e Jeanne-Claude. Jacob Baal-Teshuva lives and works in New York and Paris.
The photographer:
Wolfgang Volz has worked with Christo and Jeanne-Claude as the exclusive photographer of their works since 1971. He was also project director (with Roland Specker) for Wrapped Reichstag and (with Josy Kraft) for Wrapped Trees, and was in charge of The Wall - 13,000 Oil Barrels, 1999. His close collaboration has resulted in many books and more than 300 exhibitions in museums and galleries around the world.