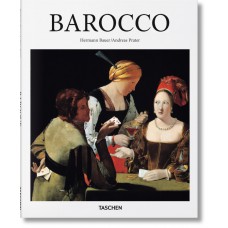 Dramatic Scenes
The rich spectacle of the Baroque

From dramatically lit paintings to elaborate gilded interiors, the Baroque era introduced a new dimension to Western art. In place of the harmonious perspectives and elegant proportions of the Renaissance came a world of momentum, energy, and heightened spectacle. The style influenced many forms and disciplines between the 16th and 18th centuries, infusing painting, sculpture, architecture, and music with a direct, often emotive, appeal to the audience.
This TASCHEN Basic Art 2.0 edition focuses on Baroque painting. Through mythological and religious scenes, still lifes, and beyond, we explore how a vivid vocabulary of deep colors, intense shadows, dramatic gestures, and diagonal lines infiltrated both northern and southern European schools. Along the way, we meet such leading Baroque practitioners as Nicolas Poussin, Annibale Carracci, Caravaggio, Velázquez, Rubens, and Rembrandt, and examine their particular innovations in composition, narrative, and light to achieve a Baroque sensibility.

The editor:
Ingo F. Walther (1940–2007) was born in Berlin and studied medieval studies, literature, and art history in Frankfurt am Main and Munich. He published numerous books on the art of the Middle Ages and of the 19th and 20th centuries. Walther’s many titles for TASCHEN include Vincent van Gogh, Pablo Picasso, Art of the 20th Century, and Codices illustres.