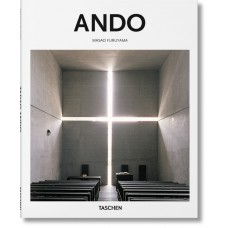 A Monumental Touch
Tadao Ando, master of the serene yet mighty

Philippe Starck describes him as a “mystic in a country which is no longer mystic.” Karl Lagerfeld regards him as a 21st-century genius who “saw everything, learned everything, then forgot everything and remade everything.” For the Pritzker Prize jury, “originality is his medium.”
In this essential TASCHEN introduction to Tadao Ando we explore the hybrid of tradition, modernism, and function that allows his buildings to enchant architects, designers, fashion designers, and beyond. Through key projects including private homes, churches, museums, apartment complexes, and cultural spaces, we explore a uniquely monumental yet comforting aesthetic that draws as much on the calm restraint of Japanese tradition as the compelling modernist vocabularies of Bauhaus and Le Corbusier.
With featured projects in Japan, France, Italy, Spain, and the United States, we see not only Ando’s global reach but also his refined sensitivity for the environs: the play of light through windows, and, in particular, the interaction of buildings with water. From the mesmerizing Church of the Light in Osaka to the luminous Punta della Dogana Contemporary Art Center in Venice, this is a radiant tour through a distinctly contemporary form as much as a timeless appeal of light, elements, and equilibrium.

The author:
Masao Furuyama studied architecture at Kyoto University and received his doctorate in urban engineering from Tokyo University. He has taught at the Kyoto Institute of Technology, where he has been president since 2012, and has published on the subjects of architecture and Tadao Ando.