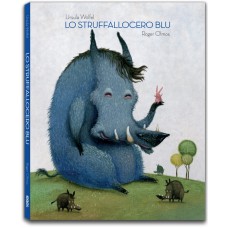 In the hot savannah, the warthogs rout around happily, looking for some delicious roots to eat, and at sunset they take relaxing mud baths… all but one, who stands aside, disgusted by those grey, stocky bodies and those snouts covered with warts. This warthog stays away from his own kind, unaware of being exactly like any other warthog… until one day he sees his reflection in the pond, discovering the hard truth. Overcome by his trivial, coarse, look, the warthog catches a glimpse of a wonderful blue fish swimming in the pond. From that moment on, he can’t stop thinking about that gorgeous fish, and he falls asleep wishing to be blue like him… and the following day, when he wakes up, he finds out he has become of that same, bright colour! Inflated with pride, the blue warthog struts around, but on his way he meets many other animals looking more beautiful, elegant and majestic than him. So, night after night, the warthog wishes for a giraffe’s neck, a lion’s mane, long ostrich’s legs… transforming himself until he loses his own identity. How can he find it again?
This surreal and funny story by award-winning German author Ursula Wölfel is now translated and published in Italy for the first time, with hilarious oil illustrations by Roger Olmos. La biblioteca della Ciopi presents a new book that will make us reflect on the way we perceive our own body, and on the importance of accepting and loving ourselves just as we are.

The author
Ursula Wölfel (1922-2014) was a German writer. She managed to complete her studies during World War II, becoming a pedagogue and a primary school teacher. In 1961 she decided to devote herself to her dream: writing books for children. Throughout her career, she was awarded several prizes, winning the prestigious Deutscher Jugendliteraturpreis twice, in 1962 and in 1991. Her books have been translated into fifteen languages.