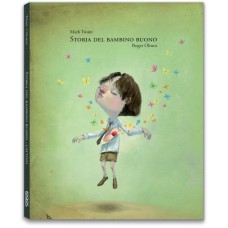 Is it really worth being “a good little boy”? Always obeying his parents, always doing his homework and never arriving late? Or is there something more attractive about the brazen immoral luck of Jim, the “bad little boy” who always gets away with his misdeeds?

Mark Twain’s two short stories Story of the good little boy and Story of the bad little boy are retold in this book illustrated by Roger Olmos, whose masterful and ironic images lead us to reflect light-heartedly on the contradictions and contraindications of moral imperatives. Roger Olmos tells the opposite and parallel stories of the two children, and has them meet one another, in a book for all ages… after all, both of them live together inside us all.