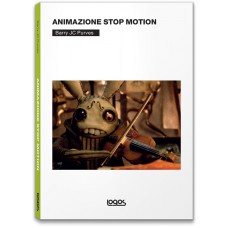 Stop-motion Animation explores how all the elements of film-making – camera work, design, colour, lighting, editing, music and storytelling – come together in this unique art form. With tips and suggestions to help you get the most out of your films, and with examples from some of the masters of the craft, Barry Purves shows how to make the most of the movement, characters and stories that typify stop-motion.
With dozens of beautiful examples from around the world, this new edition includes a project in each chapter, with pointers on finding a story and characters, developing a script and storyboard, constructing puppets and the practicalities of film-making. These projects combine to lead you through the creation of your first one-minute stop-motion animation.

“This is the must-have book for the stop-motion animator who wants to learn what it is to be a professional.” Pike Baker, www.stopmotionmagazine.com

“I wish I had a book like this when I was starting out, because what Mr Purves writes about is not only a fine introduction to the craft, but also a compilation of the kind of wisdom and insight that one can usually only gain over a very long period of time making films.” Mark Osborne, co-director of Kung Fu Panda, www.awn.com

The author:
Barry JC Purves is an internationally acclaimed Oscar- and BAFTA-nominated animator and director, based in the UK. As well as his film work, he writes about, teaches and promotes the art of animation.