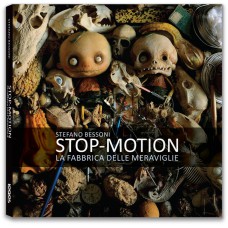 THE FACTORY OF WONDERS...

“Forget about bright colours in animated movies for children, forget about Walt Disney’s singing pets and heartening stories for cheerful families with guaranteed happy endings. Stop motion is the hidden side of animation, the mysterious, dark, unsettling side that ‘normal’ people generally try to avoid and are inclined to hastily label it as disturbing. Stop motion filmmakers love bones, rags, old toys, objects forgotten in dusty attics; they often deal with themes such as the gothic and the macabre. But if you leave behind that unjustified reluctance, the initial feeling of fear that can give you wrong sensations, you will discover a wonderful world, maybe a little sinister, but surely fascinating and engaging. Ever since considered as the little, plain and naughty sister of traditional animation, stop-motion has been haughtily surpassed by the advent of 3d animation. Just like Cinderella, it needed the intervention of a fairy who would finally cast a spell and restore justice. One day the fairy arrived, with dishevelled hair – maybe they had never been combed – a sunken face and a childish smile. He came from Burbank and his name was Tim Burton.” – Stefano Bessoni

Stefano Bessoni has created an illustrated handbook focused on stop-motion animation, with an introduction by Barry JC Purves. Starting from the question What is stop-motion animation? the author examines its history and techniques, then offers a step-by-step description – enriched with detailed photographs – of how to create an animation puppy for your animated films, taking into account the set design, the use of Dragonframe and some editing and post-production techniques. The book ends with an overview of several must-see stop-motion animated movies that you can’t miss (if you haven’t seen them already): Něco z Alenky (Alice) and Lekce Faust (Faust) by Jan Švankmajer, Rigoletto by Barry JC Purves, The maker by Christopher Kezelos, La noria by Karla Castañeda and, last but not least, Bessoni’s Gallows Songs.

The author:
Stefano Bessoni is a director, illustrator, and stop-motion animator. He was born in 1965 in Rome, where he graduated from the Academy of Fine Arts. Since 1989 he has been making many experimental films, video and theatre installations, and documentary films. In the 1990s he worked for many TV production companies as camera operator, cinematographer, and film editor. He taught film directing at the NUCT (Roma Film Academy) in Cinecittà and at the Griffith Academy in Rome. He also teaches many workshops on illustration and stop-motion animation at schools and festivals in Italy and abroad.