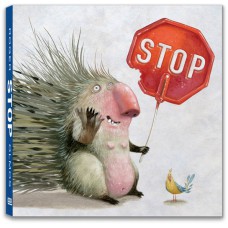 Where are all the animals going, in line as in a cheerful and colourful parade? There are neither cages or fences and they are finally free to go wild, laugh, jump and play around. Hey, there might be a surprise coming up! This unchained band does not know that an unaware (and innocent) danger is waiting for them at the end of the line.

Through his unique oil strokes, Roger Olmos secures his deep love for animals in this amusing booklet, which is able, once again, to throw us into a magic world made of bright and moving pictures, where there is no need for words. As if it were a long take, we watch the scene unfold before our eyes: many different characters and small adventures jump in, turning the children’s imagination on and encouraging them to invent a million stories and situations. Thanks to this journey through different patterns, colours and emotions, the youngest readers will get to know the animals. They will learn that there are all kinds of animals, huge and small (but not less important), smiley and serious, with a thick fur or smooth skin, and meanwhile they will hear the laughter, the music, the footsteps (sometimes heavier, sometimes softer) coming from this cheerful group of new friends.