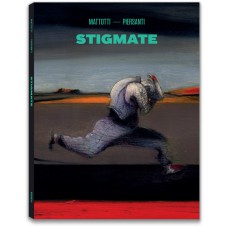 Forty-one year old, orphan, heavy drinker, he earns a living working in a café and selling smuggled cigarettes. Here is, in broad terms, the portrait of the anonymous man who one day has a strange epiphany in a dream and wakes up with his palms bleeding. An irascible weirdo, reeking of alcohol, without a real purpose in life: the last person in the world who seems likely to deserve the saints’ wounds. Indeed, he protests when somebody talks about stigmata, while the doctors are persuaded that he hurts himself on purpose, the customers of the café complain about the blood stains he leaves on glasses, and his boss thinks he’s ill and looks at him in disgust. On the other hand, a procession of neighbours honours him with holy cards and votive candles.
What is God’s project for him? That’s what the reader wonders from the very beginning of this graphic novel, and the protagonist will deal with the same question after the unexplainable ‘miracle’ leads him to disaster. In fact, because of this ‘gift’, he loses his job and his home is set on fire by the same candles offered by his worshippers. “We’re just rubbish, doomed to rot” mutters the man, overwhelmed, breaking down in the street. A verdict that will be overturned, in the end.
Stigmate is a sort of medieval mystery play, placed in a contemporary urban setting that looks more and more threatening, degraded and horrible, inhabited by many social outcasts, including greedy, deceitful and aggressive individuals, but also fragile and unfortunate creatures.
This story results from the perfect match between the lyrical and harsh text by Claudio Piersanti and Mattotti’s black-and-white illustrations, which appear dirty and more tangible than ever. Through nervous nib strokes, the artist makes the black stand out boldly, and even furiously, on the white page. Figures, faces and landscapes come to the surface through these tangles of lines, anticipating the style of Hansel & Gretel and Oltremai.
A story permeated with religiousness, where human existence, from fall to rebirth, passing through a temporary and tragically lost happiness, becomes a modern parable about the worth of any human being. A parable which teaches how, deep inside one’s personal hell, anyone deserves to rise again to salvation, even those who live on the fringe of society – the last who shall be first according to the Gospels. First published in 1999 by Einaudi in the series Stile Libero and adapted as the movie Estigmas by the Spanish director Adán Aliaga in 2010, Stigmate is now republished by #logosedizioni, as the second volume of a series presenting the artistic evolution of Lorenzo Mattotti as a comic author in a new guise.

Claudio Piersanti was born in 1954. In 1978 he obtained his degree in Philosophy at the University of Bologna and in 1981 he published his first novel with Feltrinelli, Casa di nessuno, followed by Charles (Lavoro editoriale and Transeuropa 1986, 1989; Feltrinelli UE 2000). He lived partly in Bologna and partly in Padova for almost twenty years. For a long time he worked as a journalist specialised in the divulgation of neurobiological sciences, and he was the director of a monthly neurobiology magazine for ten years. He also directed la Rivista dei libri, the Italian edition of the New York Review of Books for several years. Meanwhile, he continued publishing books with Feltrinelli, including the short stories collection L’amore degli adulti (1989; then republished in an enlarged edition, Feltrinelli UE I998 and following reprints) and the novels Gli sguardi cattivi della gente (1992), Luisa e il silenzio (1997, winner of the Premio Viareggio and of the Premio Vittorini, and reprinted several times), L’appeso (2000), Il ritorno a casa di Enrico Metz (2006, winner of the following prizes: Premio Napoli, Premio Campiello Selezione Giuria dei Letterati, Premio Frontino-Montefeltro, and Premio Alassio 100 libri – un autore per l’Europa), I giorni nudi (2010) and Venezia, Il filo dell’acqua (2012, first private edition by Consorzio Venezia Nuova, 2009). His new novel La forza di gravità is soon to be published, once again by Feltrinelli. His books have been translated into many languages, and he wrote several scripts for comics and movies, in collaboration with Lorenzo Mattotti and Carlo Mazzacurati.