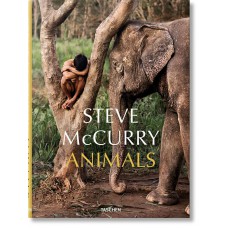 In the definitive retrospective Afghanistan, his debut TASCHEN publication, Steve McCurry portrayed a seemingly blighted yet beautiful country with disarming humanity. Now, with Animals, we discover a cuddlier and lesser-known side to the famed photojournalist who has traveled the world documenting conflicts, cultures, and traditions, garnering acclaim and countless awards along the way.

From doves to zebras and snakes, with many dogs and cats in between, the book quietly explores animals’ complex relationship to humans, whether as companions, fellow laborers, transportation, trophies, a food source, or even just casual bystanders. Tenderness abounds, particularly in repeated scenes of unkempt street dogs sleeping contentedly next to a human. But there’s also a kind of essential solitude, with animals belonging to no one and simply wandering through life with only their survival instincts to guide them.

McCurry selected the images in Animals from his vast archive, and they hail from all over—the United States, South America, Asia, the Caribbean, East Africa, Europe. Taken as a whole, the book is a kaleidoscopic travelogue—one that inspires curiosity about the many ways a life can be lived, and the silent beings who have no choice but to come along for the ride.

The photographer:
Steve McCurry was born in Philadelphia, PA, and has been one of the most iconic voices in contemporary photography for more than forty years, with scores of magazine and book covers, over a dozen books, and countless exhibitions around the world to his name. After numerous travels throughout India, the Middle East and Afghanistan, he founded ImagineAsia in 2004, with the mission to help provide educational resources and opportunities to children and young adults in Afghanistan.

The author:
Christopher Bonanos is the city editor of New York magazine, where he covers the arts and urban affairs. He's also the author of Flash: The Making of Weegee the Famous, which won the 2018 National Book Critics Circle award for best biography, and Instant: The Story of Polaroid. His writing has been published by The New York Times, The Washington Post, The Wall Street Journal, Slate, and many other magazines and websites.