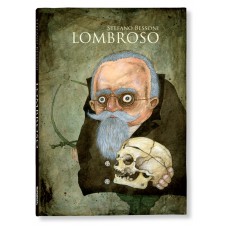 If Jane Austen had not already used it, the title Pride and Prejudice would be perfect for the story of Cesare Lombroso, a dark fairy tale set at the time of the unification of Italy, among bandits, lunatics, idiots, criminals, terrible diseases, healers, pathologists, mediums and spiritualists.
The story of Lombroso is the macabre novel of a man devoted to science, who collected skulls of lunatics and criminals and dissected corpses, desperately searching for those primitive characters that would have shown the inevitability of being “born criminal”, a theme to which he devoted himself tirelessly, constantly operating on the fragile boundary between genius and madness. His story could have originated from the pen of Mary Shelley or Edgar Allan Poe – it is so amazing, adventurous and full of anecdotes that it is hard to believe it is true.
That of Cesare Lombroso was an existence devoted to scientific progress, cherishing the mirage of positivism, which led him to think that everything could be measured, catalogued and controlled. Today his theories have been refuted but they still represent a basis for study and offer important points of reflection on the ethics of science and the methodology of research.
Fictionally starting from the confused memories that emerge in the head of Cesare Lombroso preserved under formalin, Stefano Bessoni builds a personal portrait of the father of modern criminology, a controversial figure that keeps raising fierce debates today. Both in the story and in the illustrations, the author shows his fascination with the character but at the same time he criticizes his bigoted, racist and intransigent positions, which over time have become fertile ground for so many discriminations, providing a starting point for reflection on an amazing and little known story set in an Italy which is not too different from today.

The author and illustrator:
Stefano Bessoni is a director, illustrator, and stop-motion animator. He was born in 1965 in Rome, where he graduated from the Academy of Fine Arts. Since 1989 he has been making many experimental films, video and theatre installations, and documentary films. In the 1990s he worked for many TV production companies as camera operator, cinematographer, and film editor. He taught film directing at the NUCT (Roma Film Academy) in Cinecittà and at the Griffith Academy in Rome. He also teaches many workshops on illustration and stop-motion animation at schools and festivals in Italy and abroad.
He has won various awards with his most recent films, Canti della forca, which was recognized by the Italian Ministry of Cultural Heritage and Activities as a “film of national cultural interest”, and Krokodyle, Best Fantasy Film at the 6th CINEFANTASY in San Paolo, Brazil, Best International Film at the PUERTO RICO HORROR FILM FEST 2011, Special Mention at SITGES 2011 - 44° Festival Internacional de Cinema Fantastic de Catalunya, and a Special Mention also at FANTASPOA 2011.