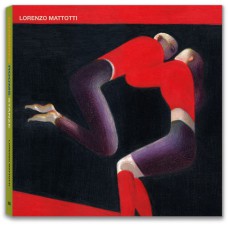 Almost 200 images representing a man and a woman on a bed. Drypoint etching, pastels, charcoals, acrylic paintings, inks and inks on Nepalese paper: each technique conveys a different emotion and offers a peculiar perspective from which to obsessively look at a single theme, namely the beginning of a love affair. With the exception of a few images in which the woman’s breasts are naked, the two lovers are always clothed and their shyness makes their first contacts unsteady and therefore even more exciting. Those are the times in which people try to spend as much time as possible in bed to explore each other rather than to have sex. Embraces and caresses, looks exchanged without touching, fingers that brush against each other or insinuate themselves under the clothes: Lorenzo Mattotti doesn’t omit a single gesture of the silent grammar of love. In these plates, so delicate and attentive to the smallest nuances, the two lovers seem to be dancing suspended in a bubble of irreality, unconcerned with anything that happens outside. They remain out of time and space, in that small chest of happiness which is their room.
An ode to colour and love, a book which enthrall the senses and arouse wonder.