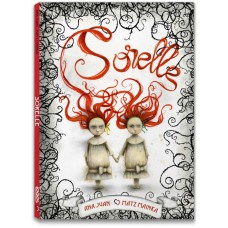 In a universe set in an unspecified past and made of castles, gardens, nannies, labyrinths and carriages, announced by a devastating blizzard and a terrible scream, two little twins are born: Lilo and Lila.
Inextricably bound by their long red hair, they grow up contemplating one another in “a kingdom of solitary dreams” that doesn’t need the outer world and can break the heart of anyone who tries to interfere with it.

Until one spring on of the two girls finds love…

“The story is about two twin sisters bound by their hair from birth” explains Ana Juan “and was written by Matz Mainka, who developed the concept of infinite love and interdependence. We worked together and developed this romantic idea of union of souls, symbolized by the hair.”

A union of souls that, page after page, unfolds like the voluptuous tresses of red hair, a fil rouge that pierces the greyish tones of sepia and charcoal, enveloping the characters and turning into monsters, dragons, castles, but also chains that leave no way out and lead to madness.