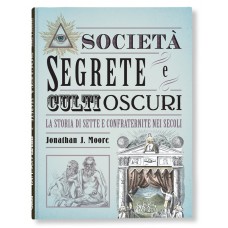 An eye-opening history of the most dangerous secret organizations

Secret Societies and Crazy Cults takes readers on a dark journey into the mysterious worlds of some of history’s most dangerous and secretive groups. From religious sects eagerly awaiting the end of the world to modern-day criminal organizations living outside the law, this book sheds some light on the groups who don’t want to be seen.
What is it that has driven humans to gather in secret since the dawn of time, to hide their labors from their fellow man? This book goes all the way back to the Iron Age to find out, charting a violent history full of human sacrifices, political killings, zealous priests, and mystic prophets.
Beginning with doomsday cults like the Taiping, whose apocalyptic beliefs triggered a violent rebellion in Imperial China, it then moves on to the chilling business of orders who command their members to commit suicide. After this come cults like the Manson Family who took the lives of others, and then ancient orders who trace their clandestine existence back hundreds of years. Finally, modern-day secret societies are investigated – proof that the secret society is by no means a thing of the past. Richly illustrated and full of shocking surprises, this book may make you reassess just what goes on in the shadows.

Jonathan J. Moore was educated at Melbourne University, gaining a Bachelor of Education (Arts) majoring in History and English. Since then, he has been teaching and writing for twenty years. He likes to research little-known aspects of history and is particularly interested in Bronze Age Greece and Etruscan Italy.
Jonathan has participated in numerous archaeological digs and enjoys participating in Living History. He is currently a member of units reenacting the American Civil War, the English Civil War, and the Napoleonic period. Jonathan also enjoys war gaming as a hobby and has written feature articles for several publications.
For #logosedizioni, he published Forche, roghi e ghigliottine, Pistole, pugnali e veleni, Malattie terribili e atroci cure e Società segrete e culti oscuri.